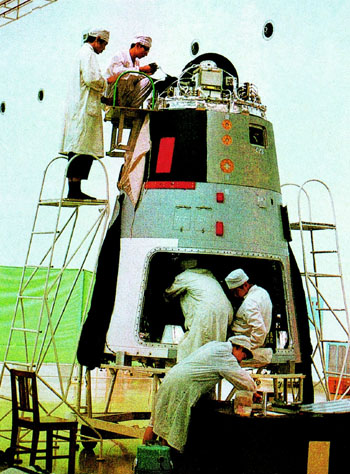 The 1,800 kg recoverable satellite was in a conical shape with a blunt tip, with a maximum diameter of 2.20 m. On later variants it was extended with a cylinder-shape section to accommodate additional equipment. The spacecraft was divided into the re-entry capsule and the instrument module, and consisted of 11 sub-systems: space-frame, thermal control, camera, flight control, programmed control, telemetry, remote-control, tracking, recovery, antenna and power supply. Onboard power was supplied by batteries, with no solar panel attached.

The conical shape re-entry capsule was air-pressured with both active and passive thermal-control. A head-shield was attached to the blunt side of the capsule to help resist the heat generated during the re-entry through the atmosphere. The capsule accommodated the film canister, retro-motor, telemetry systems, radio beacons and parachutes. The cameras, batteries and onboard computer were housed inside the instrument module, which was jettisoned before re-entry. On later variants, the retro-motor was relocated to the extended section between the capsule and the instrument module to give greater recovery payload in the capsule.

The three-axis stabilised satellite carried a single film-type panoramic camera (10 to 15 m resolution) for obtaining Earth images, and a second camera pointing away from the Earth to use the position of stars as an accurate reference for the ground location. On later variants, the satellite also carried a low-resolution (50 m) CCD camera for real-time imaging. The CCD camera could also be used to direct the operation of the film camera to avoid film wastage caused by unfavourable observing conditions (e.g. when the target is covered by thick clouds).

The recoverable satellites were launched from the Jiuquan Satellite Launch Centre aboard the CZ-2C or CZ-2D booster. The satellite operates on an elliptical orbital plane 183 km by 483 km, inclined at 57° – 63°. Early missions typically lasted 3 to 5 days while later missions 18 to 27 days.

Once the mission was completed, the satellite first made a 180° turn, so that it was travelling in a ‘backside first’ position. The instrument module was then jettisoned. The re-entry capsule fired its onboard rocket motors to generate a spin at a rate of 100 rounds per minute for stabilisation during the atmospheric re-entry. The retro-motor was then fired to slow down the capsule so that it began its descent through an uncontrolled ballistic re-entry trajectory.

Once through the atmosphere, the spin was stopped and the capsule resumed its normal position with the sharp end pointing forward. The retro-motor and heat shield were jettisoned at the altitude of 16,000 m, before the capsule deployed its parachutes. The capsule finally made a soft-landing on the ground at a speed of 14 m/s.

As China lacked the ocean-going naval forces to recovery the capsule in the sea, the landing zone for the recoverable satellite was selected in Suining County, Sichuan Province in southwest China. This allowed the satellite to be tracked by the ground station in the Jiuquan Satellite Launch Centre in its last orbit before re-entry, so that the capsule’s trajectory and landing position can be precisely calculated. It also avoided the need for constructing new tracking stations specifically for the recovery missions. The final phase of the flight before landing was also tracked by a mobile tracking radar station deployed in the landing zone for accurate forecast of the landing spot.